Enhanced Outreach to CSOs: a Collection of Good Practices of Financial Support to Third Parties 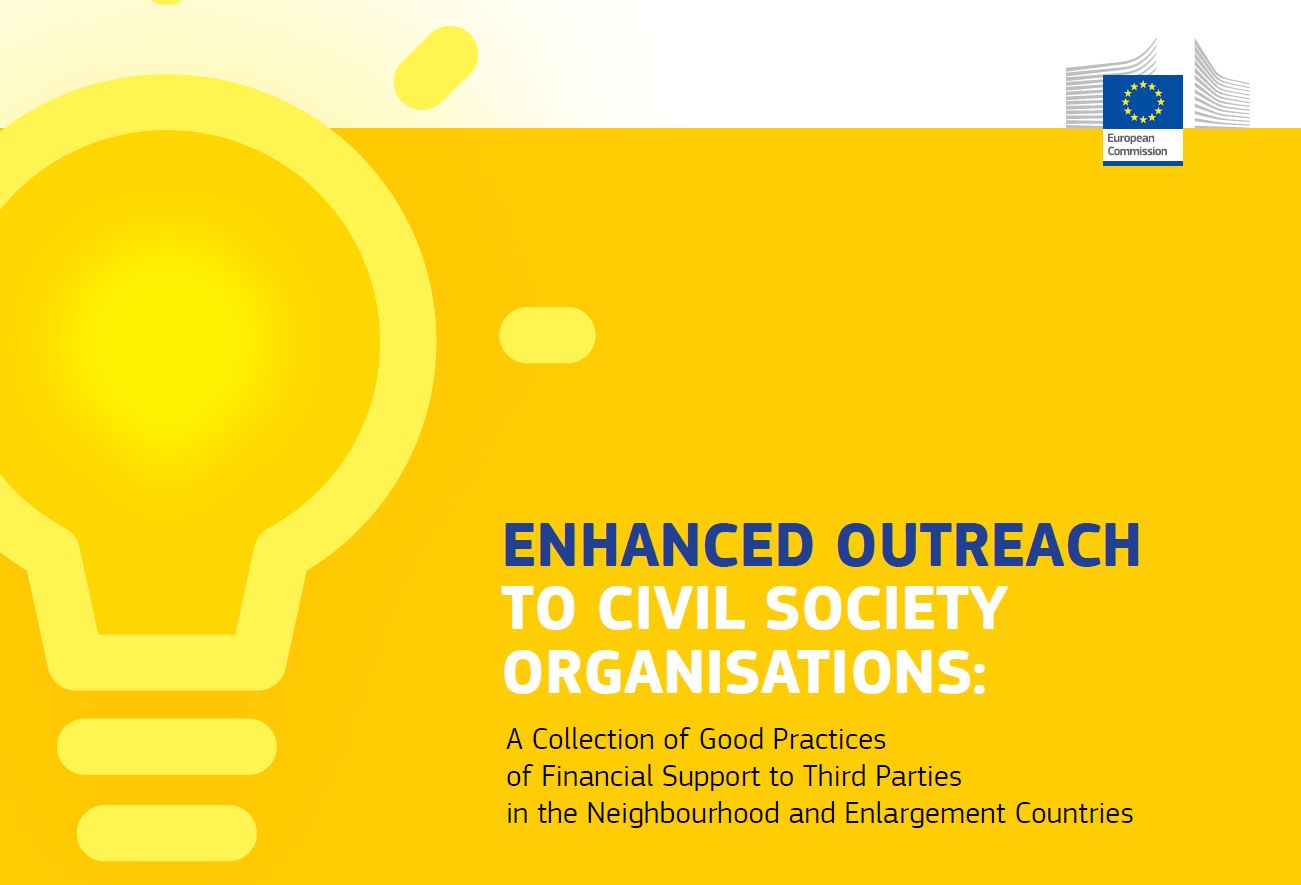 In order to reach out to more civil society organisations (CSOs) with varying levels of managerial, technical, and advocacy capacities, beyond those based in capitals in the partner countries, the European Commission has increasingly used Financial Support to Third Parties (FSTP).

With this, the European Commission has significantly increased the number of CSOs benefitting from EU support. FSTP allows for a more tailor-made support of grassroots organisations and informal groups with smaller grants and more accessible application and selection procedures which are offered in local languages. It also provides the flexibility to define eligibility and reporting requirements adapted to the capacities of target beneficiaries within the difficult political contexts in which civil society actors often operate.

CSOs in the Eastern and Southern Neighbourhood and the Enlargement region have acquired significant experience and expertise in managing FSTP. With this in mind, the European Commission’s DG NEAR launched a collaborative process, bringing together implementing partners from all NEAR regions (Western Balkans and Turkey, Eastern and Southern Neighbourhood) to allow for a peer-to-peer exchange of different practices and experiences in the implementation of FSTP.

The objective was to co-create a collection of good practices on FSTP, which aims to document the variety of existing approaches, experiences and lessons learnt from the field. The document may be equally useful to other donors supporting civil society, to stronger CSOs considering sub-granting, as well as to smaller organisations looking for good practices on a variety of topics (from assessing their own capacities to communicating about impact).

The publication was produced with the financial support of the European Union in the framework of the Eastern Partnership Civil Society Facility project and Technical Assistance to Civil Society Organisations in the Western Balkans and Turkey (TACSO) projects, implemented by consortia led by GDSI Limited, and in cooperation with the Med Dialogue for Rights and Equality project.

Download the publication: Enhanced Outreach to CSOs: a Collection of Good Practices of Financial Support to Third Parties 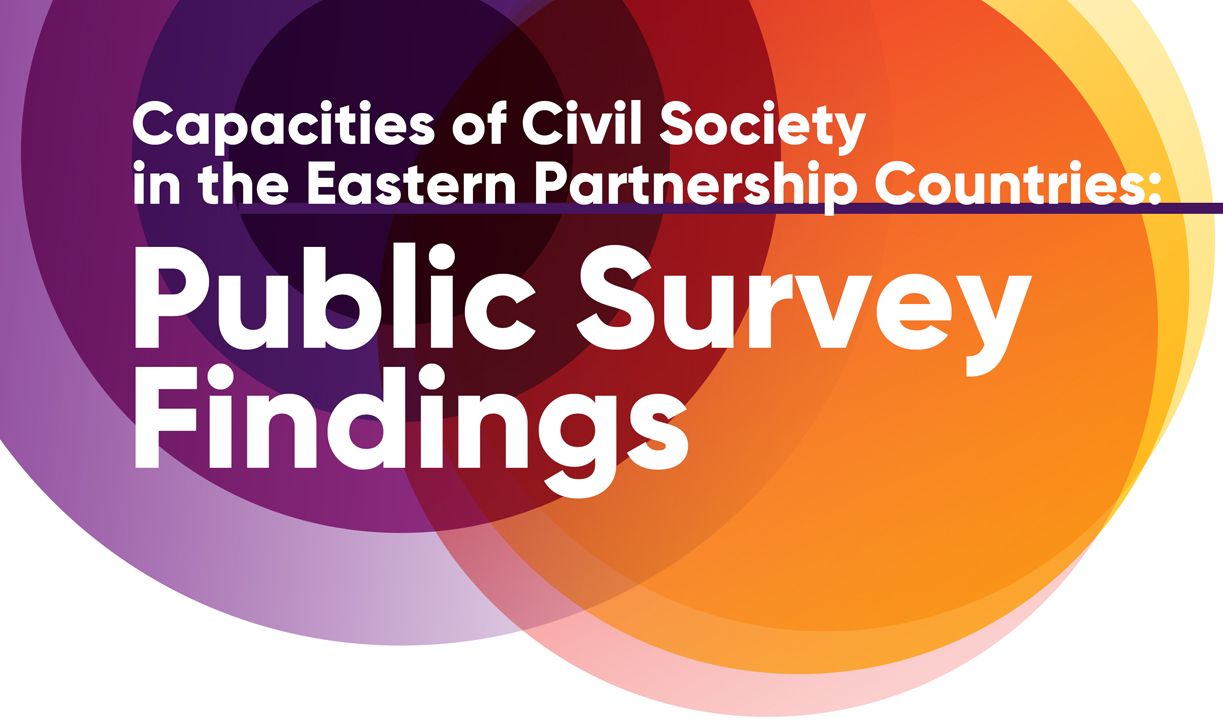 At the start of this phase of the EU-funded Eastern Partnership Civil Society project, the project team collected information on civil society needs in the Eastern Partnership countries with the aim of better adapting the opportunities we are offering in the coming years.

We had a great response rate for our online survey. Overall, 257 organisations and activists from the six Eastern Partnership countries took the time to share their views with us.

The findings of the survey were not only used to inform the Eastern Partnership Civil Society Facility project’ plan of activities, but were also used as resource for the EU Country Roadmap for Engagement with Civil Society in Armenia. The Roadmap was approved and published in April 2022 and provides an overview of priorities for civil society support in Armenia.

Since 2016, a new generation of feminist actors has emerged in the civil society landscape of Azerbaijan. These actors primarily use social media to communicate the essence of feminism, discuss gender issues openly, promote gender equality and women empowerment, and denounce harmful cultural practices that impede the advancement of gender equality in the country.  The gender equality capacity assessment of emerging feminist actors employed quantitative and qualitative research methods to gather and analyse the data on the capacities and needs of these feminist actors.

The assessment covers the following: In order to strengthen the interaction between the EU and civil society actors in the Eastern Partnership  countries, our project commissioned the Central European Labour Studies Institute (CELSI), to produce “Mapping Studies of Trade Unions and Professional Associations as Civil Society Actors Working on the Issues of Labour Rights and Social Dialogue in six Eastern Partnership Countries”. The overall study included 6 national reports and one comparative regional report, responding to the following objectives:

The comparative regional report reviewing the main findings of the six in-depth country reports and the national reports on Armenia, Georgia, Moldova and Ukraine are available now for downloading: 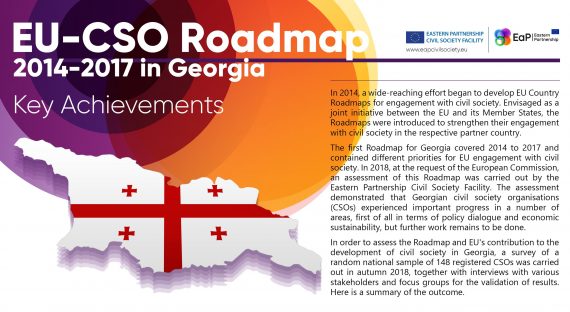 The assessment demonstrated that Georgian civil society organisations (CSOs) experienced important progress in a number of areas, first of all in terms of policy dialogue and economic sustainability. EU support was crucial in these respects, allowing for a better engagement of civil society in policy dialogue and ensuring more stable financing for CSOs. But, as civil society development and strengthening is a long journey, further work remains to be done.

In order to assess the Roadmap and EU’s contribution to the development of civil society in Georgia, a survey of a random national sample of 148 registered CSOs was carried out in autumn 2018, together with interviews with various stakeholders and focus groups for the validation of results.

Statistical Analysis on the Civil Society Sector in the Republic of Moldova: Infographics In April-June 2018, the European Union’s ‘Eastern Partnership Civil Society Facility – Regional Actions’ project conducted a statistical analysis on the civil society sector in the Republic of Moldova, including the division between active and dormant organisations, urban and rural distribution, their areas of work, people engaged in their work and communities they serve, etc. The analysis was implemented at the request of the Delegation of the European Union to Moldova. In total, there are 8,570 civil society organisations registered in Moldova. Applying the random sample methodology, 313 civil society organisations were identified for in-depth analysis. The main findings of the analysis are presented in the information graphics and charts prepared by the experts of the Eastern Partnership Civil Society Facility project. 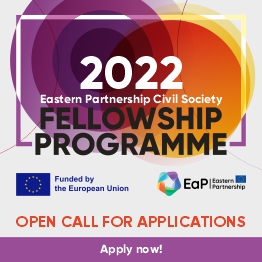