Since 2014, Ukraine has been conducting a political decentralization process that seeks to empower local self-governments and communities. The powers and funds are being transferred to the local level. Ukrainian cities are massively launching programs of participatory budgeting for increasing the residents’ awareness process of local budget forming and encouraging them to participate in local government decision-making. Participatory budgeting brings decision-making closer to citizens, so public opinion can be better reflected in city development.

In 2017, the participatory budget started to work in Kyiv. Project ideas cover an unlimited range: from educational activities to the energy efficiency of the communal building. Students, community leaders, entrepreneurs, teachers, and other citizens are the authors of the ideas.

“I got information about the start of the participatory budget from a friend on Facebook. After that, I went to the District State Administration to learn about the details. I submitted my first project during the first days when the Participatory Budget appeared in Kyiv. Unfortunately, my first idea was rejected, but the second project “Reconstruction of the Health Zone” received a positive feedback. The project was focused on a territory, which has been a recreation area for more than 40 years. Local residents have been cleaning and repairing this area for years, despite the fact that it is communal property. Local authorities always replied that this public space was not allocated to the balance of the communal property, so nobody reconstructed it.

I live and walk with children nearby this area, so it saddened me. Besides, on the last day of the project submission, I still had time to submit a skate park project that fits perfectly into the area. Both of my projects won that year. The main guarantee of the victory was that the ideas had been relevant for a large group of people of different ages. Our team’s synergy and desire to create a friendly public space in the area, which is used daily by hundreds of citizens, gave a positive result,” Olena Medvedenko, author of the project.

In Kyiv, people can vote for their preferred projects through an online system using the Kyiv-issued BankID card. Kyiv demonstrated a positive dynamic of increasing the number of voters and the size of the participatory budget funds. In 2019, 1,578 projects participated in the competition. All projects together received 654,651 votes. This big outreach was the result  of the combined efforts of civic activists, local authorities, and international donors. In 2016, the civic tech NGO “SocialBoost” developed a participatory budget system for automating participatory budgeting and voting projects online and making the process secure and transparent.

“A participatory budget can be an effective tool for improving the city but success depends on the model the city implements. If local authorities control the admission and realization of projects it leads to loss of trust. The city needs to delegate to the public a part of the responsibility for the participatory budget successful implementation. Such cities are being developed together with their citizens. Therefore, I believe that the participatory budget is very effective as a tool for city development. Best practices can be found on the website of the Center for Innovation Development,” Olena Medvedenko. 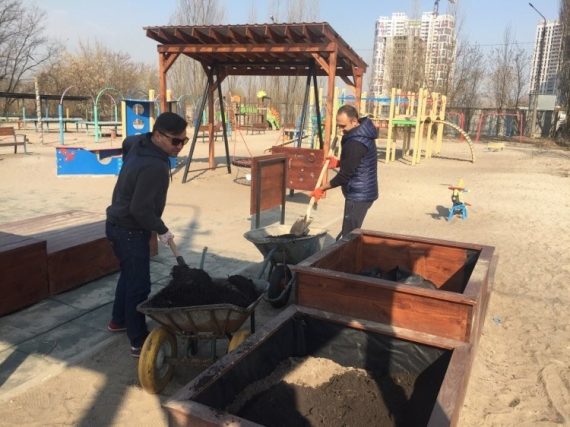 However, the main positive effect of participatory budgets is not even the projects themselves but a basis for the development of direct democracy and community leaders. Drawing up projects, searching for support among fellow residents, voting are the most important lesson of civic participation. Citizens can influence budget spending and the drafting of  a city’s development strategy. Civic participation in decision-making is an important component of a democratic society. Participants understand the budgetary process better and get new skills in project management through the participatory budget process.

“When I submitted the project, we already had a friendly team (NGO “Mykіlska Slobidka”), and this played a crucial role in our joint victory. Teams and strategies win the public budget competition. We planned and conducted different activities on the streets, printed leaflets, promoted the information in the Viber groups of parents of our school and FB groups of the neighborhood, participated in fair projects, wrote personal messages to friends every weekend. For the three weeks of voting, we could not stop for a day,” Olena Medvedenko.

In 2019, at least 154 cities in Ukraine used participatory budgeting as a citizen engagement instrument. Creating the idea of the projects, searching for support, participating in the voting, and overseeing implementation—it could be a school for further development of grassroots civil society organizations.