“When society lacks information, it believes disinformation more easily,” says Tamar Nadibaidze, a young civil activist from Georgia. “The problem of non-information is most pressing in the regions populated by the majority of ethnic minorities in Georgia,” she adds. “Due to the language barrier and the lack of sources in their own languages, they do not have sufficient information on the important processes in the country. That is why I decided to select two regions – Samtskhe-Javakheti (where ethnic Armenian minorities live) and Kvemo Kartli (home to ethnic Azerbaijani minorities), where I could provide information to the population in their native language about the importance of two main challenges facing the country since 2020 – COVID-19 and parliamentary elections,” explains Tamar. To accomplish these goals, Tamar submitted a project application with the EU-funded Eastern Partnership Civil Society Facility.

Tamar obtained a Civil Society Fellowship and that’s how the project “Promoting Civic Capacity for Democratic Oversight” began. She had heard about the fellowship from her friends, who already had similar experience and had been actively involved in various EU-funded projects. The project application resonated with her area of interest, and she decided to give it a try. To achieve her communication campaign goals, Tamar selected two local media outlets – TV9 to reach the Armenian-speaking audience, and Qvemo Qartli Media to reach the Azerbaijani-speaking audience. In June-October of 2020 both media outlets began to disseminate fact-checked information: “under the project, online media content was prepared – infographics and short videos where information was delivered in a simple and understandable language – both about COVID-19 and the 2020 parliamentary elections.” Additionally, Q&A sections were created on online pages of selected media, where people could receive prompt answers to their questions in Armenian and Azerbaijani languages. “Our awareness-raising campaign also involved the improvement of skills for the prevention of political disinformation and propaganda related to elections,” says Tamar.

During the pandemic, when the Kvemo Kartli region was declared a red zone, the content created under the project significantly increased the population’s interest in the information provided. Representatives of ethnic minorities received information on health protection measures, and messages were designed about which institutions to address and what to do, in case of developing COVID symptoms. “During our cooperation with media organisations, the problem was not so much the lack of information but insufficient resources for disseminating and elaborating the necessary form of information. That’s where my project helped to fill in the gap and I believe we managed to achieve the goal in a short period of time. There was a high involvement of the population, which was reflected in the number of those who were redirected to the website. Through online communication, the number of visitors seeking the information increased. Apart from short videos, I would emphasise the information material that we elaborated, Myths and COVID-19, which also stirred great interest among the local population,” says Tamar Nadibaidze.

Tamar says the fight against disinformation has become decisive in the face of increasing global polarisation – “in the context where there is such an intense stream of disinformation from Russia, fighting against it becomes crucial. We know that certain states spend enormous resources to spread disinformation today and it is hard for each one of us to protect ourselves from that. To avoid this, it is necessary not to attach ourselves to one news channel and try to verify information based on several sources.”

“If we have the opportunity, we should check the credibility of the source and the time of the information disseminated. We need to look at the news critically, verify it and always put it through our individual intellectual filter. This is the issue I plan to continue working on in the future, because access to objective information is decisive for informed decisions and choices,” says Tamar. 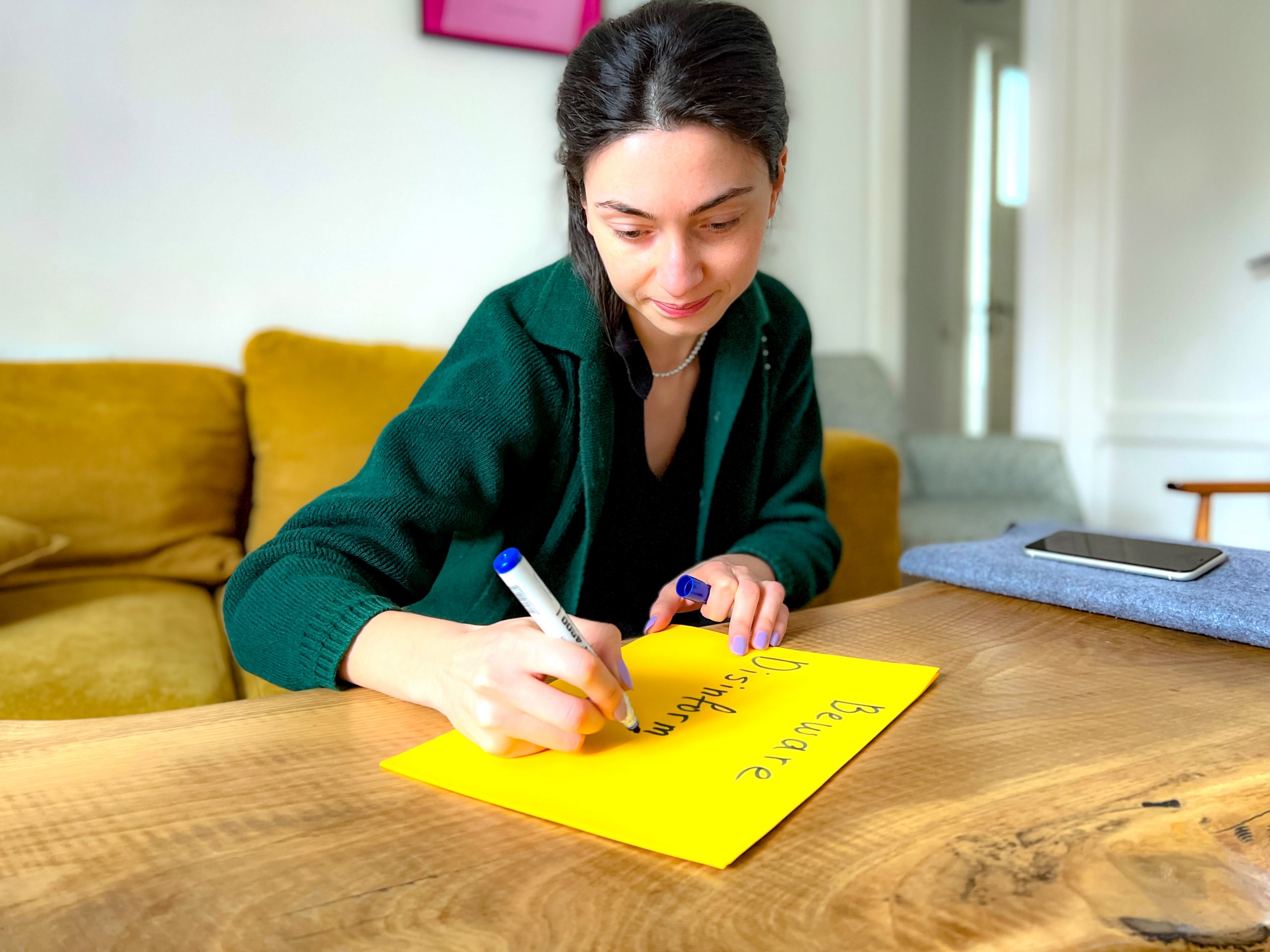 “This was the first project I implemented independently, and along the way I acquired a lot of skills. My perceptions and attitudes have changed towards different issues, I was able to better evaluate the needs in the regions and I identified problems on a far deeper level. Although the EU works in many directions, to strengthen both governmental agencies and NGOs in Georgia, through such fellowship projects I think it gives us students a wonderful opportunity to gain practical experience. It’s really important for young people to have the opportunity of access to field work, because it adds to practical skills and increases the degree of youth independence. This leaves an invaluable trace in them because youth initiatives are based on enthusiasm and are not focused on financial aspects, on the contrary, they are fully oriented on the outcome. It is through encouragement of existing initiatives that it is possible to have a new, strong and informed generation in the country,” Tamar insists.

Tamar Nadibaidze is now studying Social Sciences in Sweden, but has come home to Georgia to conduct interviews for her Master’s work. After collecting the necessary materials, she will return to her university in Sweden. She says she has many ideas and plans, and knows where to seek support in the future to implement her initiatives.

The Eastern Partnership Civil Society Facility is an EU-funded project implemented in six countries of the Eastern Partnership. Its goal is to strengthen the role of civil society organisations and activists and to develop their capacities. The project offers civil society organisations and activists from six countries the opportunities aimed at education and awareness-raising, an annual hackathon to develop new ideas and instruments, fellowships to support civil activists and young professionals, opportunities for participation in relevant regional and international events, and support for communication campaigns.

The Eastern Partnership Civil Society Facility has launched a new call for ‘Solidarity Fellowships’ for civil society activists from the 5 Eastern Partner countries: Armenia, Azerbaijan, Belarus, Georgia and Moldova. The call is designed to support civil society activists and civically-minded women and men who demonstrate a deep commitment to leading a civil response to the war in Ukraine. Successful Fellows will be able to obtain around €5,000 in financial support for their Fellowship, as well as access to various organisational/operational capacity development trainings and webinars. Interested candidates should apply here. A simplified procedure is used for Ukrainian applicants, please see the details here.

The original story is available on EU NEIGHBOURS east website in English and Georgian.

Call to Apply for the 2022 Solidarity Fellowships is Open Now!
PREVIOUS NEWS
NEXT NEWS